Is my label fake?

Probably, but don't despair. You can learn something about your violin from a fake label.

The short, bald answer is ‘probably’. And I am sorry. It’s probably not a Stradivarius that you are holding in your hands, nor an Amati, but it doesn’t mean that your violin isn’t interesting.

We specialists are now so used to seeing fake labels that we are inured to them. They no longer fill us with horror. Instead, we consider them useful pointers to what it isn’t. You see, even fake labels hold their own clues.

About fifteen years ago at Christie’s, I sold the contents of a German violin workshop. The workshop had been mothballed for decades and, tucked up amongst the brands (fake) and instruments (mislabelled), there was a dusty old book with labels printed on old paper. These labels were good. They had genuine age and could easily have tripped some people up. It was a counterfeiter’s Christmas bonus and, because I was young and ignorant, I put it into the auction. Fortunately, they were bought by somebody I now consider a friend, who, in a remarkably generous act, burnt the lot.

However, at the other end of the spectrum, there is a whole breed of label that positively screams Ebay: The photocopied image on too-white paper, clumsily glued, and sometimes, comically, with a nineteenth century signature in ballpoint pen.

So, hauling me back to the point, is your label fake? Well, unless you have had good advice and either pots of money or a kindly benefactor, then if it is labeled ‘Stradivarius’, then it almost certainly is not. For much of the 19th century, there seemed to be no bar to slapping a fake label into an instrument and, girding their lederhosen and giving one last blast on their flugelhorns, the violin makers of Saxony and Bohemia decided to start slapping Stradivarius stickers with abandon.

Knowing your Acts of Congress can help you interpret your violin label. Or at least it could if we could rely on people to stick to the letter of the law, which of course we can’t, but let’s give it a go.

In 1890, the McKinley Tariff Act, whilst not calling time on the widespread fakery of labels did insist that items imported to the USA be marked with their country of origin. This helped, although it did allow some creative license on labels that seemed adamant that Stradivarius was Saxoniensis rather than Cremonensis.

In 1914, the law tried to make things more explicit and we have the words ‘made in … ‘ before the country of origin. So far so good, but still allows a little wriggle room, so in 1921 in came the last revision (and if you wonder why it took them three goes, just imagine how many good lunches went into the final text), and, for clarity the country of origin had to be mentioned in English.

You can actually spend some time working out a label from this:

But it isn’t really worth doing as people didn’t really stick to the rules and anyway it probably won’t make much difference to the price.

And the more you peer at the labels, the more they tell you. Germany (est. 1871) hit the ground running in the late 19th century, taking up the national sports of walloping the English at football* and faking up instrument labels. So that exposes the fake Klotz violins (18th century) that proudly bear ‘Made in Germany’ labels. ‘Made in West Germany’? Then it was post 1946. If a label announces that it was ‘Made in Czechoslovakia’, then it is at least 24 years old – Czechoslovakia existed from 1918 – 1993.

If the entire date is printed then you are unlikely to be sitting on a hand-made instrument. Why? Because if you are working on your own you are unlikely to work through an entire print run of labels. As a result, most labels from real makers have the first two digits printed and the second two written in ink.

The problem is that even if it doesn’t say ‘made in Germany’ and even if the ink is on the date, it still doesn’t mean the label is right. So, let’s look at the paper.

A trick a friend taught me is obvious once thought of but cunning in practice. From about the 1850s, when it was discovered, bleach was used to make labels whiter. Bleach shines under UV light. Shine an UV torch on the label. If it glows and wants to be 18th century then brace yourself for bad news. It has been bleached and is unlikely to be correct.

Also, have a close look at the ‘white’ area of the label. Do you see the small round spots that we used to see in newsprint? More bad news I’m afraid. Fake.

I can only apologise for this brief recitation of misery and bubble-popping, but leave you with a story:

A client came to me at Christie’s with a battered violin with a fake Amati label. He was planning to throw the whole thing away. I asked him not to. Why? Surely I should have followed my responsible friend by burning the deceitful thing.

No. The label was fake but the violin itself was lovely. It was made by Michele Deconet and sold for upwards of £40,000. In fact, we have another Deconet in the office at the moment with a fake Amati label and I have high hopes of it**.

*We out-foxed them on this one by inventing rugby.

**It made more than 20k, despite a big soundpost crack on the back.

Thanks to having a beautiful, big new office, we finally now have room for the new department we’ve been wanting for years – guitars.

This is an essential reference book for people working with or interested in stringed musical instruments. 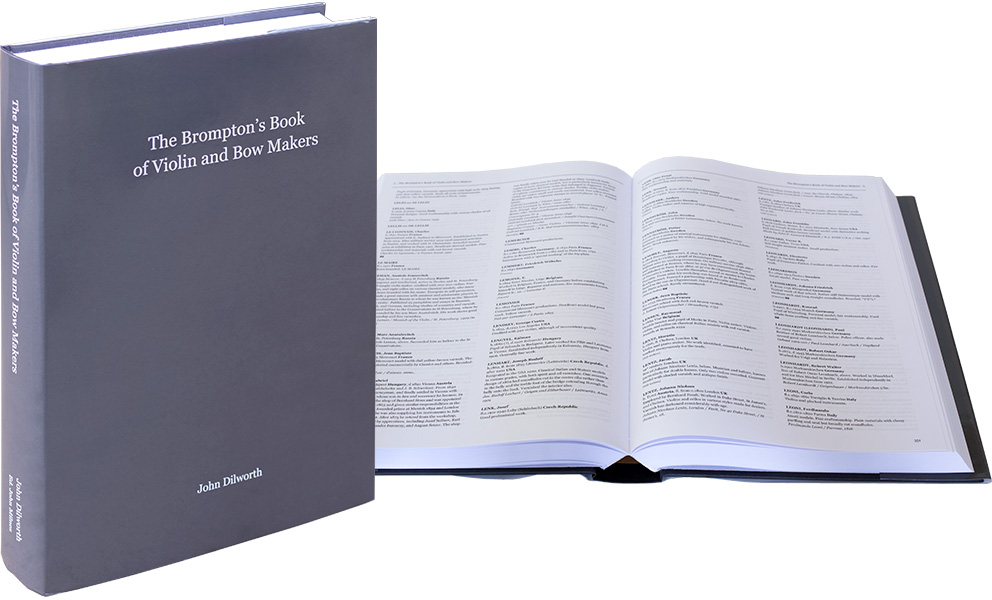 We've recently updated our after-sale process for the Specialist auctions, here is an overview of what you need to know.