He works at 122 Sauchiehall Street, Glasgow, and was born at Wakefield on July 9, 1855. He received elementary education at the Friends"' School, Rawdon. His father, who is a worthy old Quaker, gave the son a sound grounding in various subjects on commercial lines. Mr. Briggs has supplemented his early training with wide and varied reading in after life. He is a pupil of the late William Tarr, of Manchester, the famous double-bass maker. Up to the end of January 1899 he had made eighty-four violins, eleven violas, eleven 'cellos, and nine double-basses. All the work is personal, with the exception of the scrolls of the last ten instruments, which have been carved by his son Harry. He works on the Stradivari and Guarneri model, and also on an original one. The measurements of the original model are as follows : — Length of body … 14 3/16ins,Width across upper bouts … 6 3/4ins,Width across middle bouts … 3 7/16ins,Width across lower bouts … 8 1/4ins,Length of C's … 3 1/8ins, Length of sound-holes … 3 1/16ins,Depth of lower rib … 1 1/4ins, Depth of upper rib … 1 3/16ins, Distance between sound-holes … 1 9/16ins, The outline is bold and assertive, and moderately pronounced. The scroll, although original, is much in the manner of Joseph (Del Gesu). The button is well designed, but a trifle more circular than that of Strad's. The corners are full and piquant, and when viewed in con- junction with the widened waist, they give the instrument a breadth of conception. The sound-holes also are original ; they are beautifully cut with a firm hand, and are a sort of compromise between those of Strad and Joseph. The varnish is an oil one, of the maker's own com- position. Colour : golden amber with a rose flush. The tone is strong, bright, and bell-like. When Mr. Briggs works as a copyist, he may be said to be a member of the Vuillaume school, except in the matter of artificially seasoning the wood. His copies of some of the classical violins are, indeed, very fine and correct — too correct, perhaps. It is questionable whether the time spent in copying every little scratch and patch be time profitably spent. A facsimile copy, like that of Mr. Briggs' Paganini-Joseph, requires immense skill and patience, and it also requires a length of time. To exercise the greatest skill and patience is commendable, but to consume over-much valuable time is against the interests of the art. The fiddle world cannot afford to allow a born artist to dally with scratches and patches. Mr. Briggs had the largest exhibit of instruments at the Glasgow Exhibition, and in many respects the finest. The wood of the backs and ribs was exhibited as timber at the Paris Exhibition of 1880, and also at Vienna in 1890, where it was awarded a gold medal. The bellies were made from wood three hundred years old, taken from an old church in Warsaw, Poland, As an original worker, Mr. Briggs is remarkably free from conventionality, and allows his genius unlimited liberty. At one moment he worships at the shrine of old Antonio, and at the next he is an uncompromising iconoclast. Genius ever was a mystery. 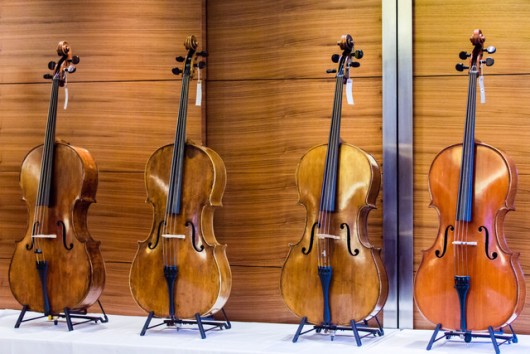 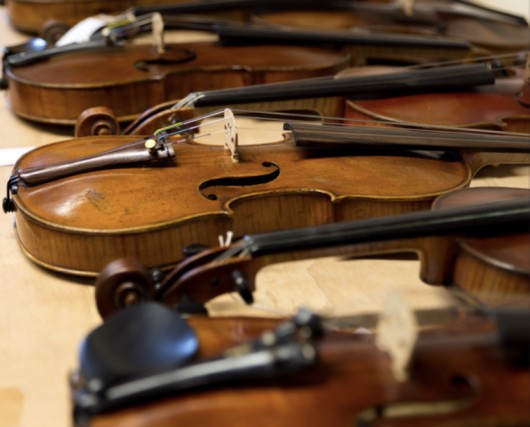