He was born at Aquhedley, in the Parish of Ellon, Aberdeenshire, on Jan. 1, 1836 — not in 1837, as stated in some biographical dictionaries. He is the son of William and Mary Hardie, and is one of thirteen children — seven sons and six daughters. His mother's maiden name was Strachan, and she belonged to Drumnagarrow, Aberdeenshire. She is still alive, and considerably over ninety years of age. Hardie received his education at the Methlic Public School, and in the Normal College, Edinburgh. He commenced his first instrument, a violoncello, when nine years old ; it was a copy of an instrument belonging to his father, and he made it throughout, except the pegs. This was an exceptionally early age at which to take up the gouge and calipers ; but the real period of work commenced when he was fifteen, at which age he began to work under his grandfather's instructions at Dunkeld. On January 23, 1862, he was married to Miss Elsie Milne Davidson, at Methlic. From this union there has sprung a progeny of thirteen, named in order as follows : — Elsie, James, Elsie, William, Mary, Isabella, Mary, William, Alfred, Charles, Isabella, Evelyn, and Maud. Of these, six died in infancy. This accounts for several of the names being the same. The eldest son, James, who was an excellent violin player, and a leader in the Theatre Royal, Edinburgh, died on April 6, 1898. From the age of fifteen down to the present, Hardie has been constantly at work. He is a prolific maker, and has, according to the strictest account, produced well over two thousand fiddles. He has made himself a goodly number of violoncellos and double-basses. All the work is personal. His sons assist him in minor matters, such as regulating, stringing up, &c., but not in actual making. Mr. William Hardie, however, has made one violin. Out of the two thousand and odd violins made by Hardie, a proportion of about twenty per cent., i.e. something like two hundred, are superior instruments, and reach a high standard of excellence. Many of these, it may be stated without exaggeration, are simply beautiful, and will certainly add lustre to the fame of Scotland's makers. The material used in them is of the finest quality — chosen more for its acoustic properties than for its artistic appearance. The varnish is very fine, having for its basis fossil amber. It varies in colour from rich golden yellow to red and ruby, but is more successful in the golden yellow than in the other tints. He commenced to use amber oil varnish in 1869 — just nine years after the first experiments of Dr. George Dickson, whatever may be the significance of the fact. I borrow the statement from Mr. W. C. Honeyman that Mr. Hardie is largely indebted to the Doctor for his initiation into the ???????? - of the method of dissolving amber. Certain it is, however, that Hardie makes, and always has made, his own varnish, Hardie follows the Stradivari, Guarneri, and Maggini models, but has a decided preference for the last named. His measurements are those of the great Brescian, but he varies in the thicknesses according to the density of his wood. All his instruments on the Maggini model are double purfled. This fact will help the average connoisseur to detect forgeries. It is curious that two series of forgeries of a diametrically opposite character have been perpetrated in connection with Hardie's name. One is recorded by Mr. Honeyman in his sketches in the People's Friend. It is this : several of Hardie's cheaper instruments — "pot-boilers" in fact — were purchased some years ago by a certain individual and labelled " Panormo " and " Fendt," and then sold in auction rooms. The other is still more flattering to Hardie. A certain maker (personally known to the author), of mediocre attainments, possessed a fine Hardie fiddle (Maggini model) and made a number of copies of it. He varnished them with a poor oil varnish in glaring yellow, fitted them up, inserted a forged Hardie ticket, and got rid of them at the pawnbrokers. Some of these were sold afterwards for considerable sums. I know the locale of three of these counterfeit " Hardies " at the present moment. It has often amused me to watch their role in the little masquerade they carry on. One changed hands recently for £12. These " Hardie-Maggini " forgeries are, it should be noted, single purfled. Aliquando bonus dormitat Homerus. Hardie's wood is excellent, and his tone is large, rich, and telling. He succeeds well in producing the Maggini tone, and, no doubt, when his violins have been well used, the tone will have the copious " tears " of the Brescian maestro. His prices range from £3 to £20. He has exhibited on several occasions. At the Edinburgh International Exhibition in 1886 he gained a bronze medal; at the Glasgow Exhibition in 1886-87 an honourable mention ; and at the International Exhibition, Edinburgh, in 1890, a gold medal. An Exhibition prize violin is shown in the illustration. Facsimile label : — 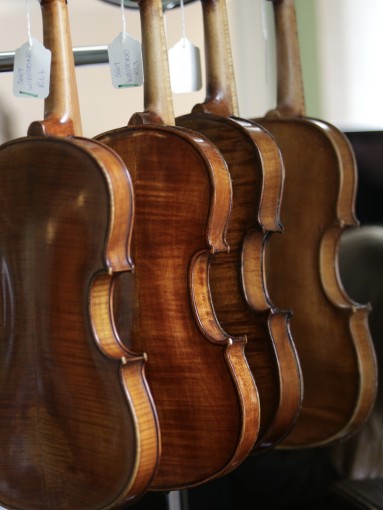